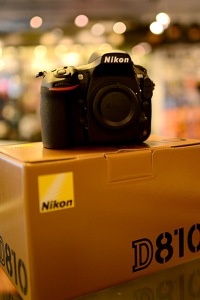 Please also read my impressions after spending a little more time with this camera in the field photographing wildlife in Finland!

I’ve been very lucky and got to bring the brand new Nikon D810 home with me home this weekend! I got to play around with it for a couple of days, before returning it. While I’ve barely scratched the surface of this camera, I thought I’d share my thoughts on it so far. This is no in debt review or lab testing. It’s simply just my experience and thoughts after using this camera for a couple of days.

What’s new?
The new Nikon D810 is the successor of the highly acclaimed D800. It’s kept the high-resolution, but added more power under the hood with the Expeed 4 processor. This means the new D810 let’s you shoot more frames per second, have an upgraded focus system, and new features when recording video. You also get one step lower and one step higher ISO value, and a lot of minor upgrades such as RAW S and Picture Control 2.0. All in all, it looks good on paper, but how does it hold up in reality?

Build quality and design
The D810 is very similar to the D800. No doubt about it. It’s pretty much the same build and the same quality. It’s a bit smaller and lighter than the D800. I find it a little less bulky than it’s predecessor, and I think the grip is a lot better on the D810.

For photography
Before I talk about the image quality, I want to note that I shot mainly JPEGs as I don’t have any software that handles the RAW-files. This is not the best basis for judging quality, but then again this is not a lab test either. As for image quality there is very little to complain about. It’s nothing short of amazing. The sharpness and details are just astonishing. Just from looking at the images I’d say they’re a bit sharper than those from my D800. Just like the D800E the D810 doesn’t have a low pass, or AA-filter which could make it prone to moiré and aliasing. While I didn’t specifically try to provoke moiré, I did not have any problem with moiré and the camera seems to handle most situations quite well.

Just like the D800 the D810 is a real joy to shoot with. ISO range have been extended in both ends with a low at 64 ISO, and a high at 12800 ISO. I didn’t get to do an in-depth test to see how well it deals with noise compared to the D800, but from what I can tell it handles noise well. As I’m used to shoot RAW and now shot JPEGs it was hard for me to draw any concrete conclusions about how much better it handles high ISO noise.

The D810 is able to shoot up to 7 frames per second which is a nice upgrade. Combined with the new auto focus-system it makes this a quite capable camera! One of the things that I like best with this camera is in fact the new auto focus. It’s faster and more precise than the D800, and the new group-AF is a really nice feature. It makes it easier to keep moving objects in focus. I shot my dog running towards camera, and the AF nailed more shots than my D800 would’ve done under similar conditions.

I also find the D810 slightly less prone to motion blur than the D800. With the D800 I’ve found the camera sort of prone to motion blur on slow shutters. On the D810 however, I’ve not encountered the problem. My guess is that this is because of the new shutter and mirror construction. It’s suppose to create less vibrations.

For videography
The new D810 have some nice upgrades to its video capabilities as well. The most obvious one is the ability to record 1080p50/60. I think this is really overdue and should have been in place on the D800 as well. Just like the D800 you can get 10-bit 4:2:2 video out via the HDMI, but unlike the D800 the D810 is also able to record internally while at the same time outputting 10-bit video to an external device. There is no 4K, and I don’t really mind, to be honest. I think Nikon (and other camera makers for that matter) should focus on handling HD video well before they venture into higher resolutions.

Video is very similar to what you get on other Nikon cameras when it comes to settings and features. The exception is a new button which gives you easy access an on-screen menu so you can get access to some features such as zebra while recording video. The D810 also have some new audio features, and a built-in stereo microphone. The built-in microphone is pretty poor, but I didn’t really expect anything else., however the ability to filter out wind, or strengthen vocals is a neat little feature.

The higher frame rates are accompanied by higher bit rates as well. For 50/60p recording the bit rate is 40Mbps. For 24/25/30p recording however, the bit rates are the same as the D800’s 25Mbps. I’m a bit disappointed that Nikon didn’t come up with better internal recording on this camera. It’s great that you’re able to output uncompressed studio profile video, but a higher bit rate and less compressed video in camera would make it a more versatile camera.

Nikon were the first to put video in their DSLRs with the D90, but they’ve not been keeping up with the rest when it comes to video features. So, while speaking of features that are way overdue, the D810 finally got zebra stripes. A feature most videographers are used to and have missed on most DSLRs. It’s nice that they’ve finally built-in this feature, but it’s locked on 100%. Personally, I like working with zebra at 70%. Why Nikon has not incorporated zebra settings I don’t know. The same goes for focus peaking. I would’ve expected this basic feature of a brand new camera that claims to be a multimedia tool. While the higher resolution on the LCD-screen makes it easier to focus it’s still hard to be precise enough without focus peaking or other tools.

Nikon have met one demand though. They’ve added a flat profile for video shooters. This records with a setting that’s aimed at giving you the best dynamic range and the most to work with in post production. I didn’t get to test this feature thoroughly enough to say how well it works, but Nikon has redesigned the Picture Style feature so it looks promising.

The video that the D810 produces looks pretty amazing. I didn’t get to do a lot of in dept testing of the video feature, so I can’t say how well moiré and rolling shutter is handled. From what little I shot the first thing that stood out was sharpness. I find the D810 video to be much sharper and more detailed than that of D800.

Conclusion
The D810 is not as revolutionary as the D800 was. However, the upgrades are quite noticeable! I primarily shoot with a D800, and I do notice the difference between the D800 and the D810. Most notably is the higher frame-rate, the better autofocus and that it’s less prone to motion blur. These are significant upgrades and they make the D810 a much better all-rounder than the D800.

I was a bit disappointed when it came to the video though. Yes, 50/60p is a big step forward, but it’s nothing extraordinary. Same goes for zebra. These are basic features in a pro camera. I find that the whole video feature is still missing a bit. Unlike Canon or Panasonic who also make video cameras, Nikon have nothing to lose by going all in on the video! Then again they have no experience with video which may explain the lack of basic features.

So will I be upgrading? The D810 doesn’t offer big enough upgrades for me. I do a lot of events and what I need is higher ISO and better auto-focus. Yes, the D810 has both, but it’s not significant enough. I’d rather look for a D4 as it is better than the D810 on both accounts. Also had there been bigger upgrades on the video I’d may consider it. It’s still missing some key features for me. I feel Nikon really wants to make a good video feature, just doesn’t know how. I really like the D810 though. Don’t get me wrong. However, for me and what I use the camera for, the upgrades simply aren’t big enough to warrant an upgrade on my current budget. That’s not saying I really, really want one though!

Please also read my impressions after spending a little more time with this camera in the field photographing wildlife in Finland!

Check out the gallery below for some test shots!

Finally, I got my D800! Long waiting lists and slow delivery from Nikon resulted in a bit of a wait. Working in a Nikon Pro Dealer didn’t help either; you see, we let our customers get their’s first! That being said, I have had nearly unlimited access to the stores demo model, though.

But a demo model you borrow is not the same as your very own, and now I’ve got it! I haven’t been testing it very thoroughly yet, but I’ve been taking it for a spin out in the field and capturing a few shots. Shooting a fair bit of landscapes, the details, sharpness and dynamic range is something that just stood out immediately! (as did the huge file size! This is going to eat away at my 2TB mirrored NAS) It’s great! I’ve tested it hands-on before and so I knew what I was getting. Some minor things to get used to with a full frame camera, some new buttons, but not many. All in all, it didn’t take long to get used to it, but man what an enjoyable camera. Just fun to work with!

Below are some shots I took with the D800. The RAW-files were edited quite quickly, but you get the picture.

Godalen in Stavanger and the fjords beyond as seen from Vålandstårnet